This book series presents an unequaled interest to any practitioner and I think one should make the effort to study it in detail. (Obviously that is not enough: the weapons work is almost incomprehensible without a competent teacher who knows the full meaning of the kata).

The first surprise with this book about aikido is of course its title: Traditional Aikido, subtitle Sword - Stick - Body Arts. The wording "Traditional Aikido" can now rise a smile as one could argue that the word has become a marketing trick, but in 73, obviously, it meant something precise to Saito sensei who was already facing some degree of uncontrolled evolution from the founder's techniques .

The logic of O Sensei's Aikido in Iwama is clearly stated and summarized by Saito Sensei: Aikido is the RIAI, it is the method and principle. Volume 5 deals with this notion constantly. Nothing makes more sense then to discover that the first lesson of Aikido of these five volumes is a weapon lesson: the first chapter is devoted to the sword and the seven suburi.

Then soon enough, page 51, the principle of irimi, here: Yamabiko no michi. 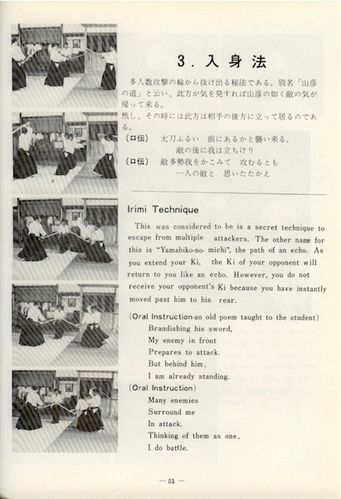 We learn that - alas! I do not know its source, presumably O Sensei himself ... - that the principle of irimi, see above: "was considered a secret technique to escape multiple attackers.

The other name is Yamabiko no michi, the path of an echo. When you extend your ki, the ki of the opponent will return to you like an echo you back like an echo. However, you do not receive your opponent's ki  because you have instantly moved to her back".

(By John Stevens, The Essence of Aikido, Spiritual Teachings of Morihei Ueshiba)

stand as firmly as a god (for O Sensei this is not only a metaphor but a reality: incarnate the god, let flesh become divine , kami waza ...)

Flourish In The very center (and when it comes to flower in the East how not to think about the lotus, the principle of growth, elevation? / in the center, your center)

The stance of love is (and more precisely, the guard, the kamae of harmony / unification rather than love - a bit too new age for me, sorry)

The Path of the mountain echo

Nothing could be clearer

Stand here and now, making your center the place of creation, our guard will operate as an echo.

"When you extend your ki, ki of the opponent you back like an echo."

We call and we receive a response.

We initiate and we unite with the response. Tori: Take one step away with the right foot, immediately hit your opponent's face with your right te-Gatana (...)

Uke: Seeking to head off the strike the right arm. "

Instead of waiting for a shomen or any other action we begin.

It's a reflex since we always react quickly to stimuli. The partner/opponent which will easily become our mirror or reflect what we give. A handshake, a smile, a disgust within you / the other will have an immediate echo.

Thus we initiate the shomen to attract a response from the opponent.

This way we are able to be with him/her very early in the process, just by taking the initiative ...! So we are never late. We unite immediately, we embrace and cancel the aggressive intentions. Just like in Shomen Ikkyo.

That is a major revolution O Sensei achieved, both rational, concrete and symbolic.

- Rationally, the strategy to begin will avoid being late or working with our reflexes.

Too often this attitude results in a disaster. Only over trained stand a chance: it is a battle between strength / speed / training. Suffice to say that we will always late, guaranteed. Shomen ikkyo in these conditions? Book a cab for A+E.

(When in feet-fists combat, liberation comes when uke is deprived of the initiative).

This early unification prevents the strenght to grow, to reach us and we can control it with ease. Since we do not oppose it but diverge the force right from the beginning, the strength of the partner no longer exists. This allows even small or  relatively "weak"practitioners (compared to muscular monsters) to be effective without performing physical prowess.

- Symbolically, based on a well performed technique, uniting energies will create the possibility of a different relationship with the other, less or non-confrontational.

Assume the conflict will help cancel it. This strategy allows to guide and finally cancel the fight.

We then see that the principle of Irimi is way more than simply enter as often translated. Moreover, it is to create, stimulate the movement of the partner to better control it immediately, take the echo of our gesture and calm this mess in the ukemi.

Unfortunately, almost all demonstrations show a omniscient, omnipotent tori dominating uke… waiting to use his technique and make him fly.

That implies reviving the old confrontational duality undercover of nonviolence claims, it means reinstalling the invincibility as the central fantasy, it's being deluded about his own abilities of reaction and eventually it condemns oneself to a paranoid training that consists in awaiting uke's aggression.

We often see O Sensei initiating uke's moves with a tiny sign, a nothing, a gesture, an opening - and having reached his level he did not need more these subtle signs... The moment he reacts to that stimulus, Uke is no longer master of its destiny.

Concretely and symbolically Yamabiko no michi is a major concept of Aikido.

As a conclusion, let the master teach.